Simon Kjær interview after Denmark against Austria in Parken Stadium, Copenhagen, on October 12, 2021. With former Danish football players Lars Christian Jacobsen and Flemming Povlsen. Denmark won with 1 - 0 and qualified as one of the first for the World Cup 2022 in Qatar.

Kjær interview after qualifying for the World Cup 2022

To do this at home, and do it this way. How do you feel about it?

Simon Kjær: “It fills me up so much. I really think you have to start way back with Åke (Harraide, former national coach before Hjulmand), the journey we have been through. We built a team and a mentality that was incredibly healthy. Everyone is equal. And at the same time we have always been hungry to develop, constantly develop the team.”

“The way we play, for more and more strings to play, and the dynamics that lie inside the team, and that community around those who play… the reality doesn’t matter. Everyone is hungry to play and we want each other the best. If you keep on building, with all the quality we have, well, then we can get somewhere. We have come a long way, but we have really just become more and more hungry. We want more.”

Yes, you are not really a young player anymore, 32 years old... We could say, it’s a mature age for a football player. But you’re hungry as well. What is it made of?

Simon Kjær: “Ambition. We all play for big clubs and have insanely high ambitions for ourselves individually. But to be able to combine that with not putting yourself above the team… So, I have played for many big clubs, I have played many places with many different personalities and it is not always easy to find. There is no one here who is above the team and that is perhaps the greatest strength we have. And so with all that quality, we see people just keep evolving and keep taking more and more responsibility. ”

"There is no one here who is above the team and that is perhaps the greatest strength we have."

”When Christian left the team, under the circumstances he did, well… we got even closer together. And the people who have had to go in and fill in the space for him, well, they have stepped up. We also relied on experience, tried to support them as best as we could and made the conditions even easier. But of course, Christian will always be missed. At the same time the team has also grown completely insane.” 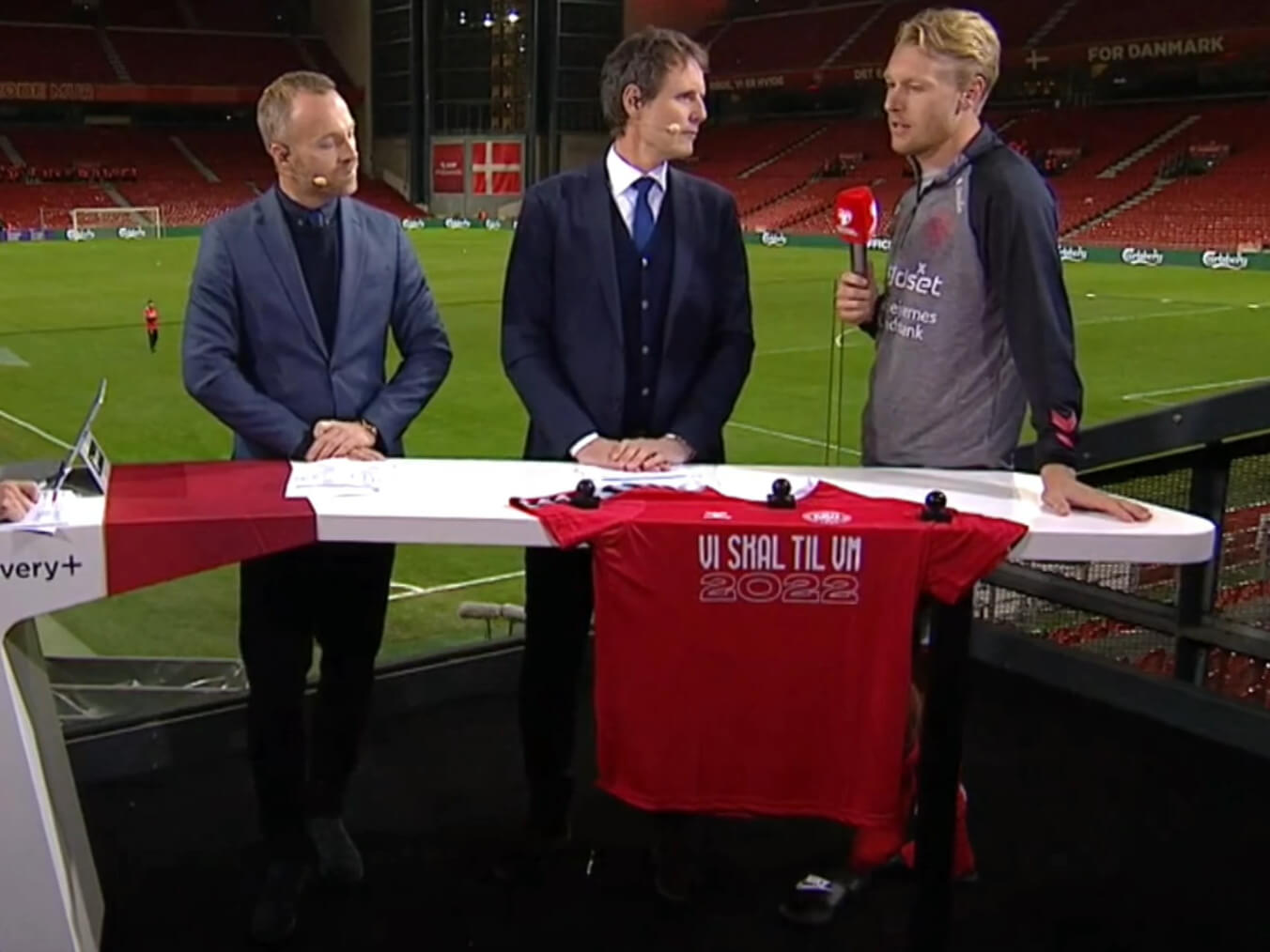 And it's a lot. So you have started… so you may have always done it, but it has become even more obvious now, the thing about putting it into context. What you do, it is not just a football match, it is not just a tournament, it is not just…. It's a bigger thing. You just referred to Åke Harraide, today we paid tribute to Sepp Piontek (also a former coach). It is all put into context. And we can not help, when we are here (at Parken) Kjær, looking at the corner where we were all on our knees (when Christian collapsed). You did what you did in that situation. You wore an Eriksen jersey today, we could see it. Did you get it from a spectator? Or what was it?

Simon Kjær: “I got it from a spectator.”

simon kjær, i absolutely love you for this. ❤ pic.twitter.com/ifcwSuQ2qS

But it was not a coincidence that you put it on, I assume. So this “playing for something bigger”, what does that mean for you? It is also a motto, by the way, but it is not something that has been taken out of a random slogan. It seems as if you really mean it?

Simon Kjær: “Well of course. Everything is part of something bigger. We have all come from different small clubs in different places in the country and to be able to go in here and be able to give back… We have always said it is something special to play for the national team. So that's it. And when you can play at Parken under these circumstances, well, it's just an experience of a lifetime and something you have to enjoy every single time you're here. You do not know when it's the last time you're here and we got the best example ever (referring to Eriksen). So it's about enjoying it.”

“But we still keep being hungry, still keep moving the overlay. I can read sometimes that we’re missing, so to say, to beat the biggest, but that's what we're working on all the time.”

"We have always said it is something special to play for the national team."

“We got into the semi-final last summer and we want more. We want more. Now we're going to the World Championship, so we have to keep moving, keep pressing. And then at the same time… Well Christian means a lot to me. I have played on the national team with him, I do not know how many years, 10-12 years. And after what we have been through, and the way the nation and all fans support us…, that has been something extraordinary. Kasper (Hjulmand) says it every time.”

“Every single time we come home, those who play abroad, we do not quite understand that mood. We only do that when we are here (Parken), because it's something completely insane every time. So we’re very grateful for the support we’re getting and we’ll do anything in the world to give something back.”

“We are grateful and appreciate the support we receive. The optimism and the bright future. You can also see and stand and talk about it. We all have the same opinion. We want the same.”

"We got into the semi-final last summer and we want more. We want more."

The Golden Generation, as Flemming Povlsen called it, we are in the middle of it. It is also a privilege for us who stand here and watch and cover it. Lars, what do you say?

Lars Christian Jacobsen: “It is what Simon says, this feeling, the ultimate support and desire to give something of himself. Simon is standing here now, that is, and there have been times during Danish football, I have been a part of it, where you may not have had the profit. And the profit is there now. When you as players give as much as you do, in addition to results, the results are also something that is nice to have, but you give so much of yourself that the fans feel they are a part of you. When I think back on my own career, we could have given 5 percent more, and that’s where the national team is now. And can you just give a little more, a little more, a little more, all the time. The fans sit back and take it in. It is meant positively. And it goes up into a higher entity.” 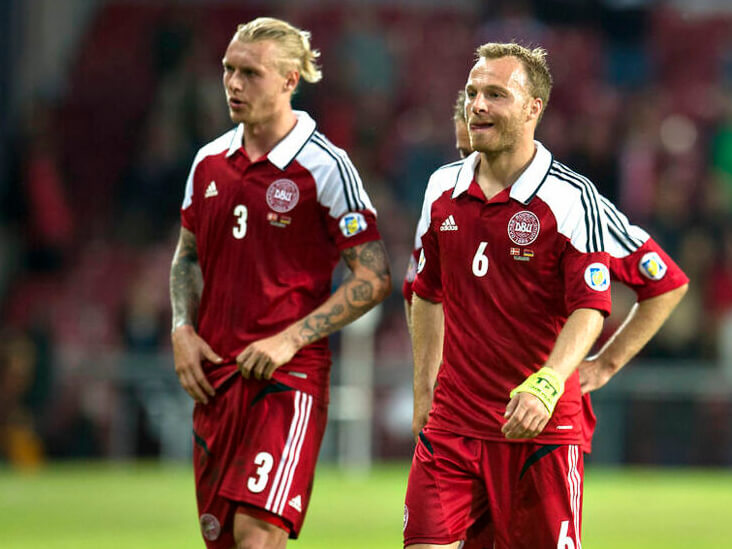 Simon Kjær and Lars Christian Jacobsen played together for the Danish national team in the past.

Flemming Povlsen: “It is also an image and something you have worked purposefully on. Hjulmand is involved and that path you have entered nicely. In that way, it's just about… as Simon is taking in the good experiences, to himself, to the team, and to the mantelpiece at home when his career ends, in a number of years of course. But when it ends, you must have something to have your career in. It is something like this that is of the utmost importance when you are allowed to present yourself in this way for your country.”

It definitely seems like that, and you’re saying it yourself, you are hungry, you are ambitious, you need more. There was a man, Gulddreng (Danish musician), who has made his song about winning the World Championship. Is it caught out of thin air, because there are many who say it is trending on social media, and everything else. Is it a dream that lives in you?

Simon Kjær: “Yes of course it is. We know there is a really, really long way to go…”

And many good teams.

Simon Kjær: “And many good teams. But why not? Of course there must be some… in football there are many small coincidences during a match and those coincidences must be for us. It did not go our way at Wembley in terms of the penalty kick. That will be always be a part of me for the rest of my life, as a negative thing. But at the same time it also does something about the motivation and hunger that we must chase. What we must keep chasing.” 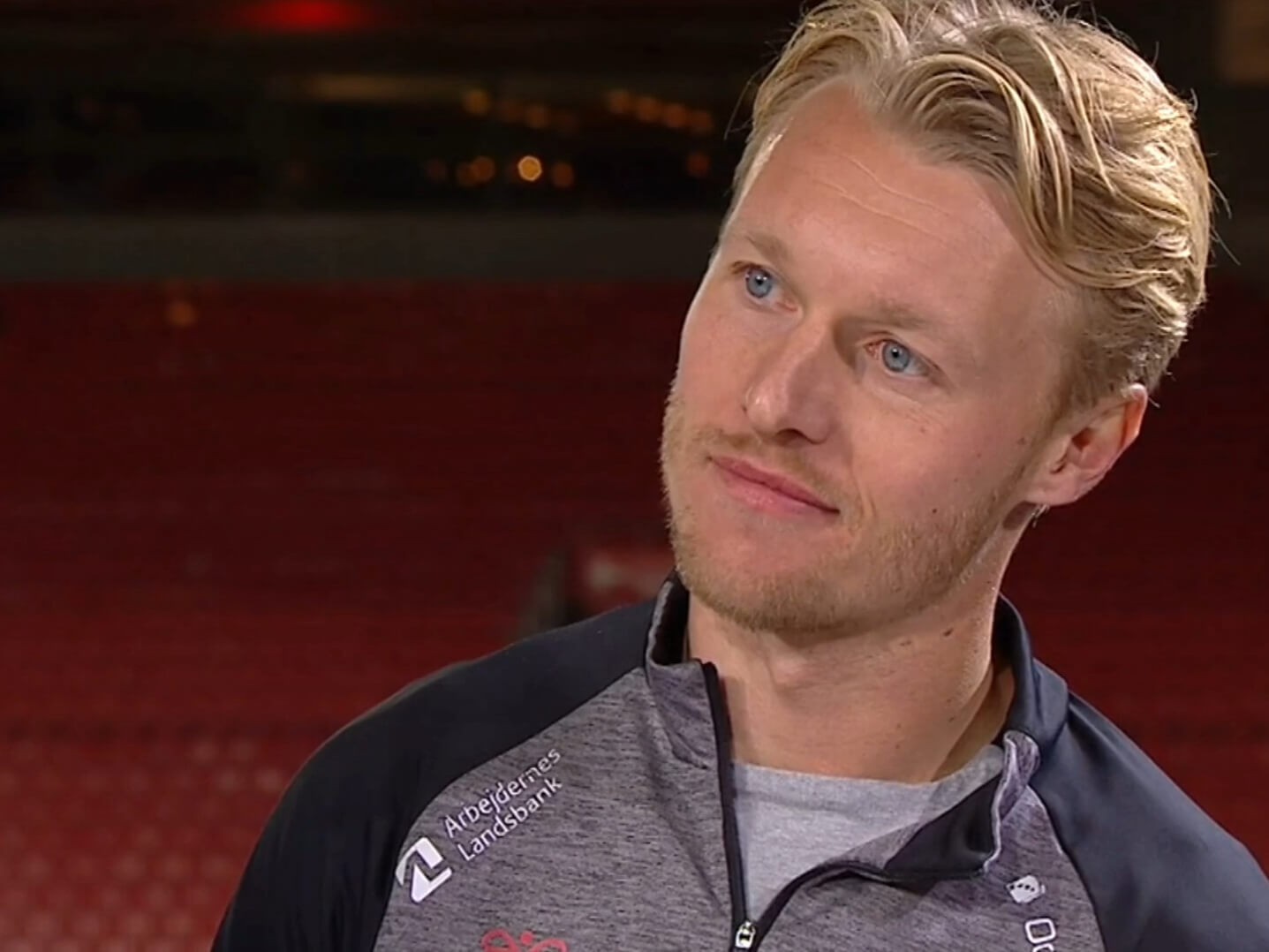 Flemming Povlsen: “And as long as the team has faith, it does not matter to point out the things that don’t succeed. If the team has that drum and the group has the faith, we have to create something extraordinary. Then the team will further develop the next year. There may be new ones, but the team has the skills to go to the World Championship tournament, and says `Why not us?`.

Simon Kjær: “The hunger and the faith that we have in this team, it may be greater than we express. I am from Jutland. I am a humble person, and so on. But of course we want more, of course we want more. And we will keep pushing. Of course we will try to win the World Championship, but we will not come to it as sleepyheads. And we have to work hard every single day forever. When we play for our clubs and when we are here. We need to keep developing our game.”

"The hunger and faith that we have in this team, it may be greater than we express."

Then I have to right here in the end, you always have to just end up having the upper hand in the studio when you say goodbye to a guest. And you are behind 2-1 in relation to the Ballon D´or nomination (Flemming was nominated twice and Simon once).

Flemming Povlsen: “He just needs to be taller than number 12.” (Flemming was number 12 at some point)

Lars has been saying all along that you should take that nomination, Simon.

Flemming Povlsen: “It's strong, it's also one for the mantelpiece…”

There are so many things to enjoy about Simon Kjær. Many thanks for the visit here and congratulations for reaching the World Championship, which will fortunately take some time, so we can build up to all sorts of good things there. And matches must be played against the Faroe Islands and Scotland, before we can put an end to it. Keep the clean sheet in those matches too!

Simon Kjær: “We will try. Many thanks!” 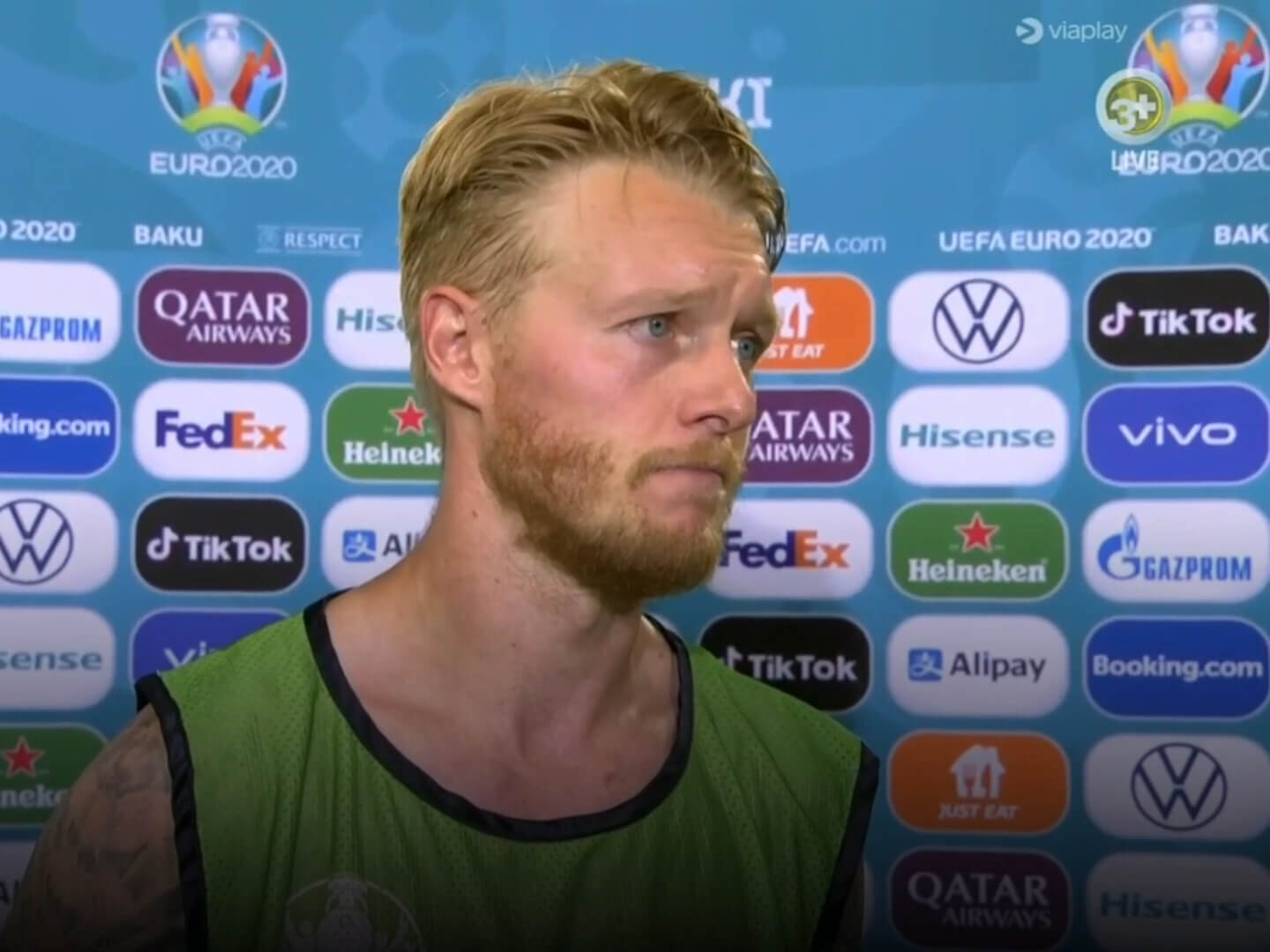 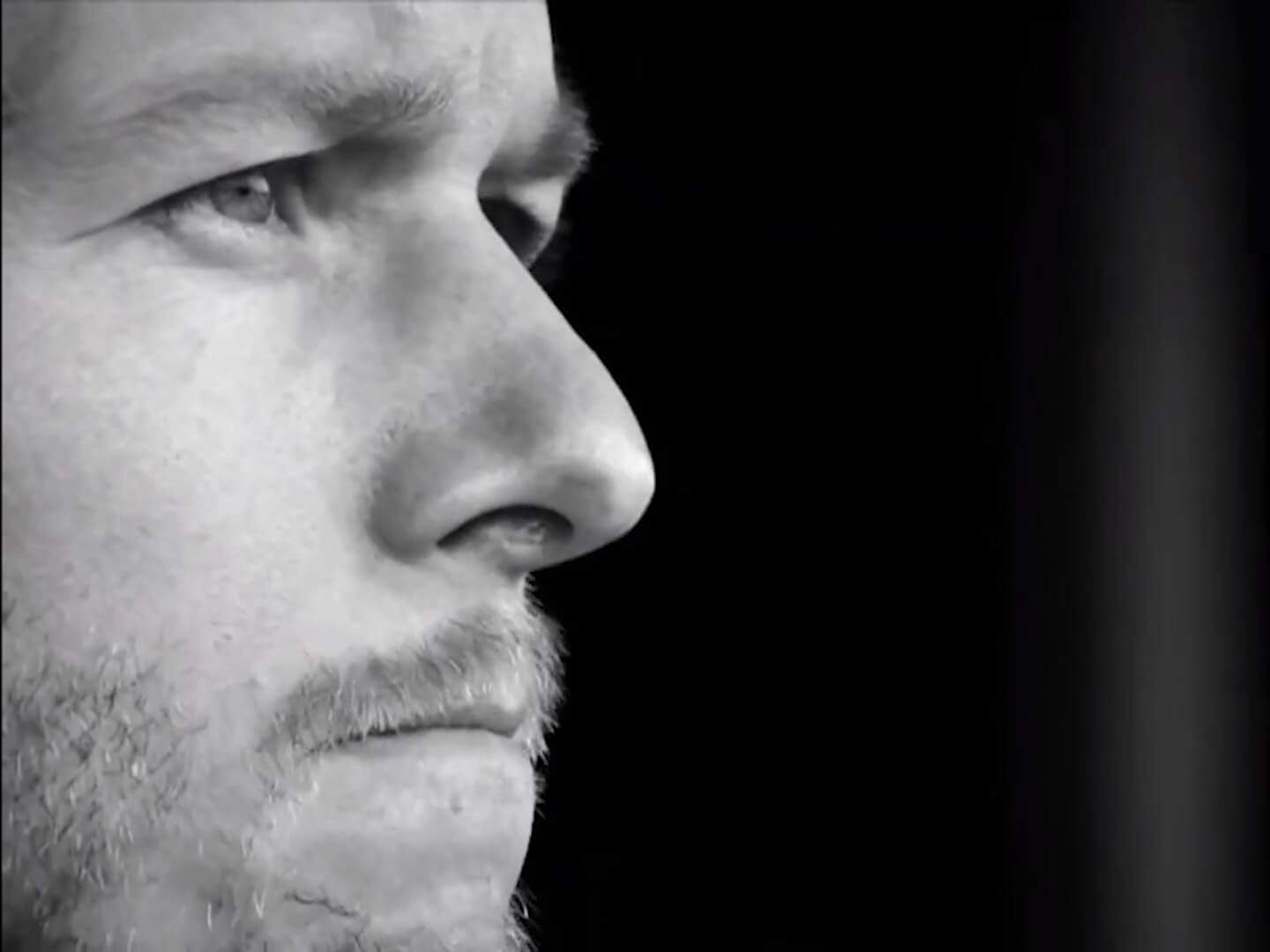 Documentary about Kjær's debut and more.

Simon Kjær thanks the fans for their enormous support. 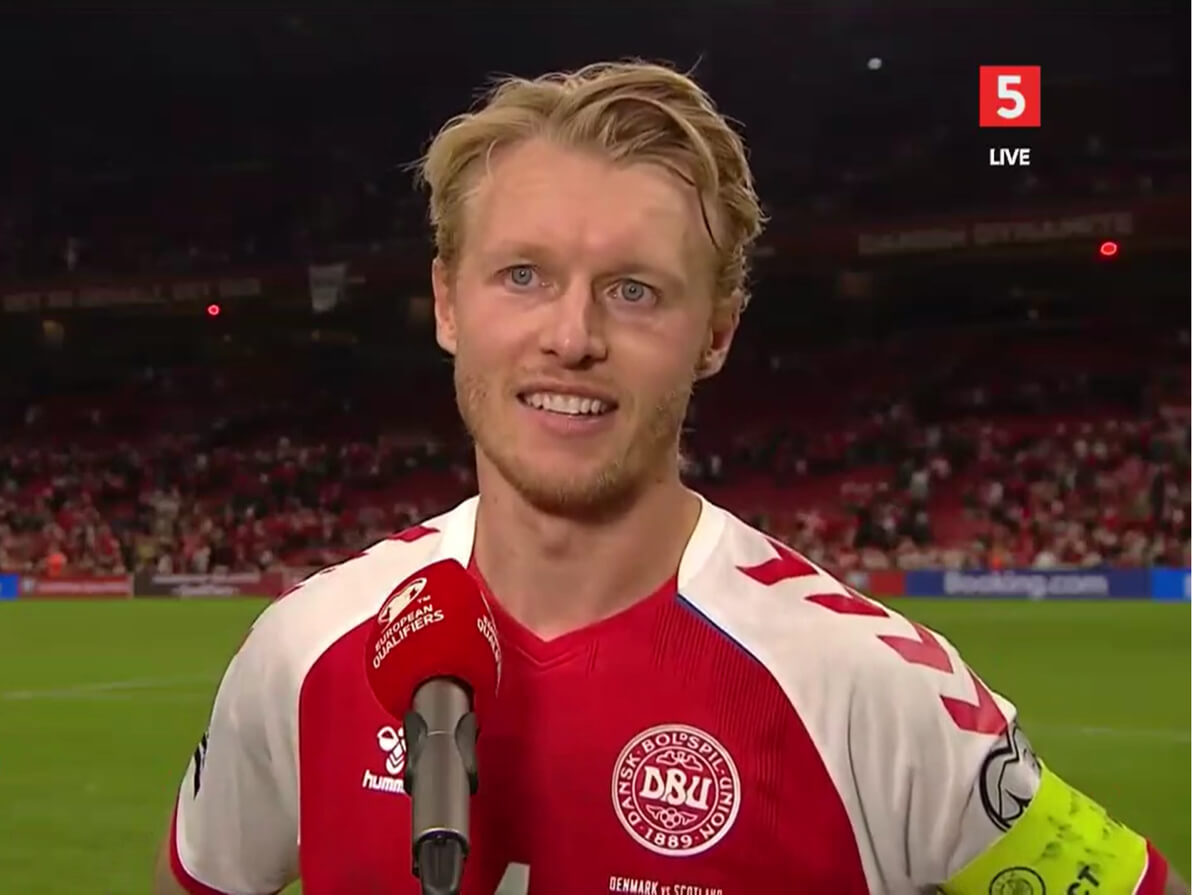 And that's 2 - 0 against Scotland at a full Parken!