Keep calm and carry on

Simon Kjær and Gianluigi Donnarumma: What was that like?

Simon Kjær and Gianluigi Donnarumma were teammates at AC Milan, until Donnarumma left in 2021. The two have had a strong bond, and we believe they still have. We will take a moment to reflect on the complicated situation with Donnarumma in general. Apart from that, you will find the best pictures, GIFs and stories about our favourite defender Simon Kjær and the former AC Milan goalkeeper Donnarumma. 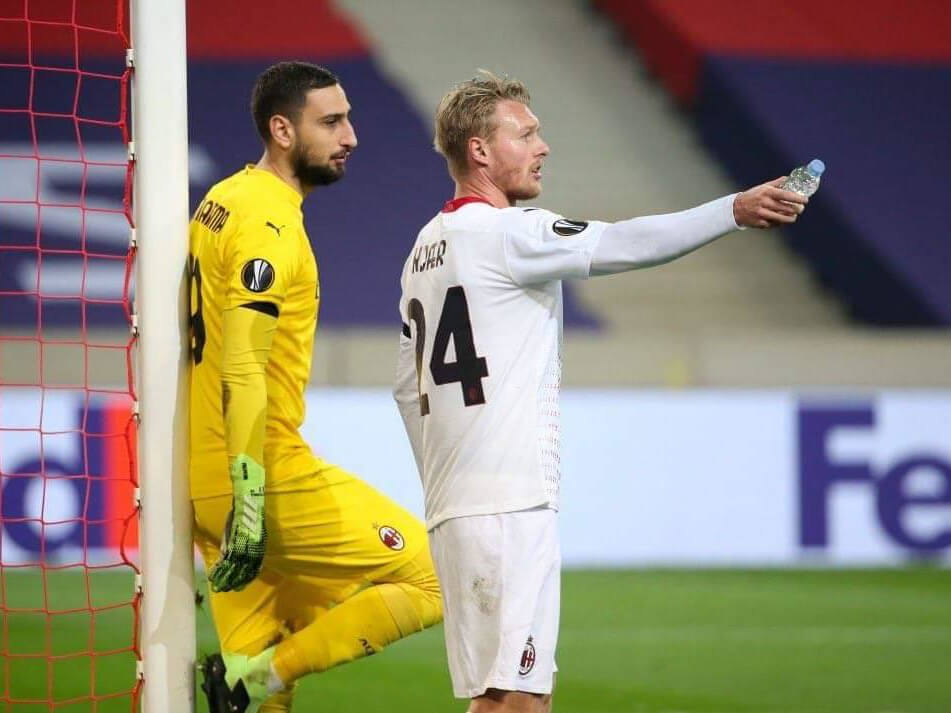 After all that happened with the once beloved AC Milan goalkeeper Gianluigi Donnarumma, it has become almost a crime to say one positive word about him. We may not need Donnarumma back at AC Milan, because we have Maignan. But we do distance ourselves from the bitterness against Donnarumma. Let's move on and get over it.

If you can live with that, feel welcome here and let's have a look at some enjoyable moments of Simon Kjær and Gianluigi Donnarumma.

Let's start with some fine GIFs of Kjær and Donnarumma.

Kjær and Donnarumma have been working closely at AC Milan's ministry of defence. Perfect teamwork most of the time and so there was quite some reason for hugging on the pitch. 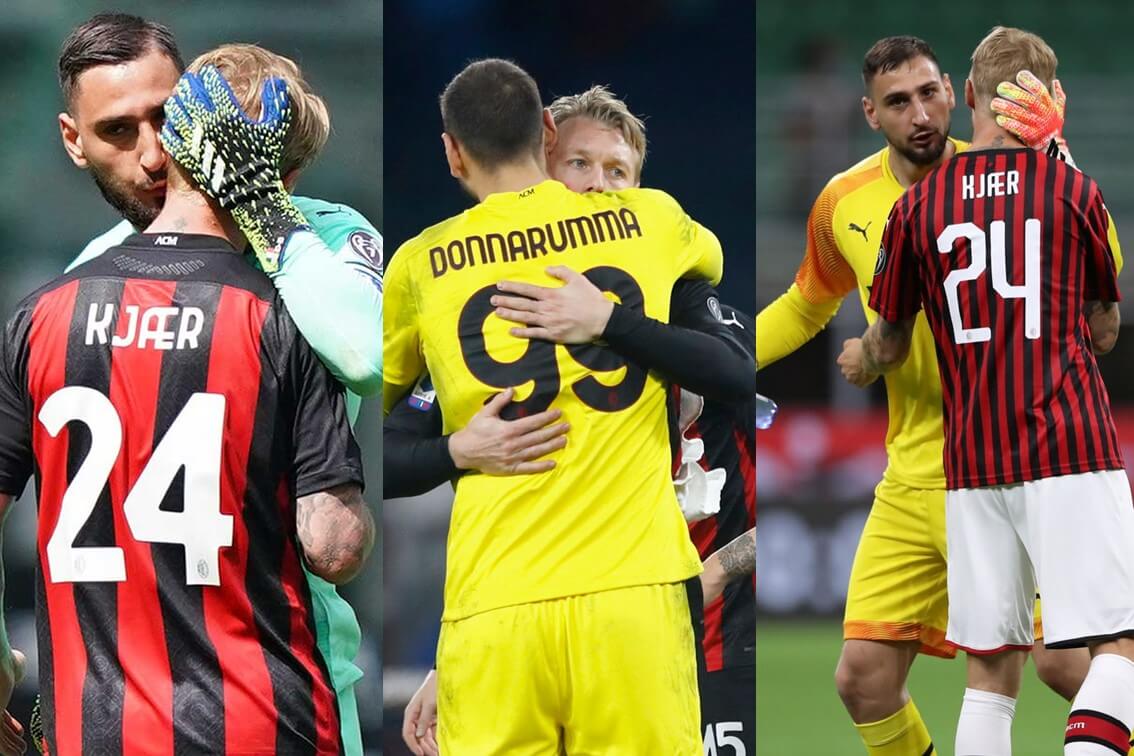 Kjær and Donnarumma sat next to each other during the prestigious Ballon d'Or 2021 football award ceremony. As can bee seen in the picture below.

Why are AC Milan fans so mad at Donnarumma?

Many AC Milan fans are in particular angry about the way how Gianluigi Donnarumma left their club in 2021.

There's a thread on Twitter from @IkenyeMoses that pretty much explains it from a fan point of view.

At a point where everything looked blank, a period we could hardly buy any quality player. The peck of the Milan banter era comes this 16years old with a lot of talent. It was a time lot of Milan fans had giving up and he brought a bit of hope. He was so young and yet so talented

Gianluigi Donnarumma who was born 25 February 1999 became the second-youngest goalkeeper ever to debut in Serie A, aged 16 years and 242 days. Coach Siniša Mihajlović, decided to promote him to the first team. It wasn't as if we had a bad golie then, just the Injuries!

President Berlusconi wouldn't allow that, as we still have Diego Lopez and Christian Abbiati in our ranks. Coach Siniša Mihajlović had to put his job on the line. Berlusconi redundantly accepted as we were broke and can't afford to pay Mihajlovic off...

He was scared at first and made lot of blunders but we the fans cheered him on, we encouraged him, we hardly criticise him. The fans saw a future, that kinda feeling when your goal keeping position is sorted for 20+ years. They gave him the confidence and protected him!!!

The saga started when he wanted to sign his first contract, his Agent Mino Raiola started making some outrageous demands. It was a dark time for all Milan fan as we thought the little light at the end of our tunnel was going dimn.

Eventually he signed but the signing came with a lot of selfish and annoying clause. First we had to sign his brother and pay him £1m a year for 4 years, we paid him £6m per year. Not Maldini, not Baresi, not Nesta not even Buffon earned £6m at 18years old!!!

At a time when the future looked blank for the club, the chinaman was no where to be found, Mirabelli and Fassone were destroying the clubs account. The fans heart was broken when Donnarumma said he won't be signing with Milan. He later said it was his agent that pushed him.

The fans weren't happy at the gesture the contract talk went, they started calling Dollarumma. AC Milan fans reacted angrily at his Italy U21 game against Denmark. Play was briefly halted during Italy U21's game against Denmark as fans threw fake dollars at Gianluigi Donnarumma

He looked to repair the already bittered relationship with the fans, he suspended his agent and opening declared his love for Milan. Milan fans saw that as a sign of apology and took him back, we as usual sang his songs again, we protected him from press. Prodigal son returns!!

We believed again, he was the one to lead us out of the banter era. Even when he cost us a champions league place after making that blunder against sampdoria. The fans forgave him and stood with him. Then contract start running down, he would need to sign again. SAGA 2.0

First he started with the excuse that he wants to play Champions League football, then Raiola started tauting the fans that he was going to leave. The trauma all over again. Unlike the previous management we had someone that is symbolical to the club.

A man is symbolical to the club, a club legend, arguably the greatest defender of all time. Paolo Maldini was at the regime of affairs and his first attempt at renewing donnarumma's contract was to improve his salary from 6m to 7.5m (this was a period where ac Milan was broke)!!

Unlike the previous management, maldini wasn't going to be bullied by Mino Raiola, who was demanding for 12m per year for a 22years old, 20 million as agent fee and also giving his family some amount of money. Maldini made known to Donnarumma that his offer won't go past £8m

Paolo Maldini tried to talk to Donnarumma after the 2-0 win against Atalanta. Maldini made one last attempt to persuade Gigio to stay but Donnarumma replied: “I do what Mino (Raiola) tells me".

Yes, it is quite a story. What happened next?

Maldini with his team took the initiative and went hunting for a goal keeper. Under the raider no one saw it coming when they announced Mike Maignan, while Raiola and Donnarumma were waiting for a number deal, Maldini took his loss and got a quality replacement.

It came as a shocker to Raiola who had assure Donnarumma that Maldini would succumb. He was at Madrid, Barcelona, Chelsea, Juventus and PSG marketing his player as he Milan had moved on. Maldini addressed the fans and the fans gave him their backing.

So, that explains quite well all the emotions. But at some point this chapter must be closed. Simon Kjær never stopped showing his appreciation for Donnarumma. And that's exactly why our favourite defender shows leadership once again.

"Simon Kjær never stopped showing his appreciation for Donnarumma. And that's exactly why our favourite defender shows leadership once again."

In an interview from April 2022, Simon Kjær said about Donnarumma: "When I think of Italian players with an international profile, you can’t not mention Donnarumma, a fantastic goalkeeper with whom I was delighted to share part of my AC Milan experience with." 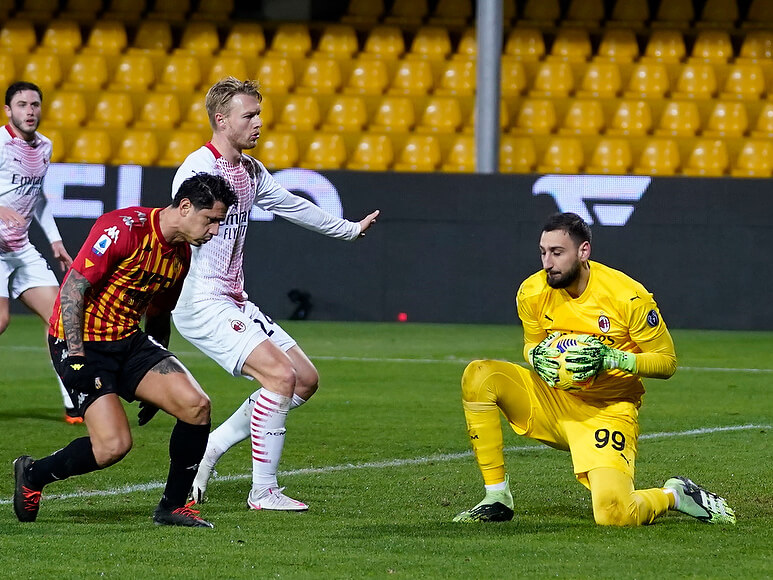 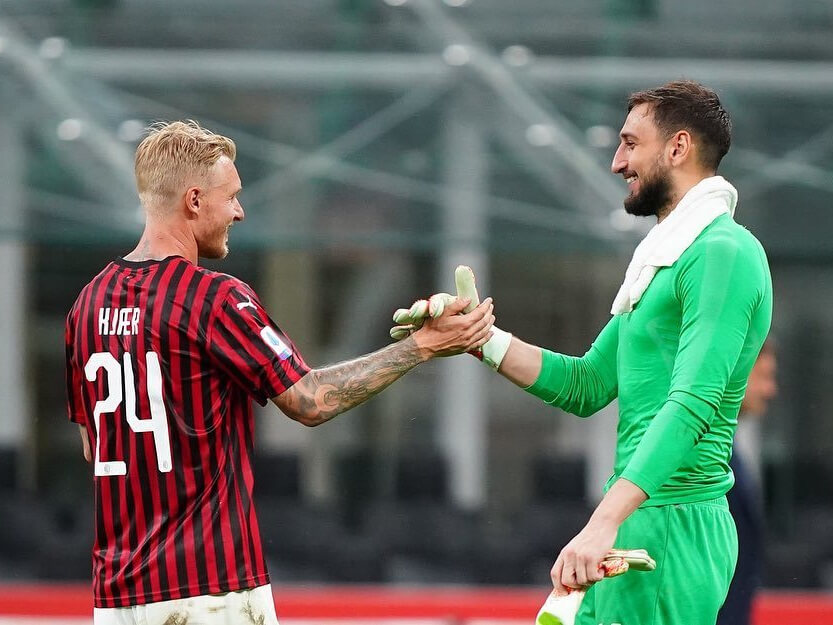